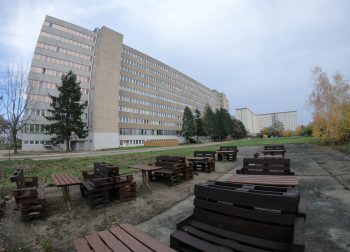 Mitte is a district of Berlin in the district of the same name. This includes an important part of the historical parts of the city. Here is the eastern center of the capital with the former city centers Alt-Kölln, Alt-Berlin and also the Brandenburg Gate, the Humboldt University, the street Unter den Linden, the Museum Island and also the TV tower. In Berlin Mitte there are many federal institutions, such as the Berlin Senate and the House of Representatives in the Prussian Landtag, as well as a number of embassies.
The Meininger Hotel is a family-friendly hotel in the Mitte district. It is centrally located in the city center and the location is very convenient. The hotel is equipped with a guest kitchen including a washing machine. This is very important especially for families with children and also if you want to stay here longer. Dogs can also live in the family room. This costs 10 euros per day. Every room in the hotel has been designed by special DaWanda designers. You can relax on the idyllic terrace in the courtyard or in the cozy lounge with bar. The hotel is also suitable for large families. There are rooms with up to 6 beds. The multi-bed rooms are equipped with a double bed and also with bunk beds. Cots are available free of charge on request Provided.
The hotel is located on Oranienburger Straße, where there are many cafés and restaurants. It is only 500 meters from the hotel to the Museum Island, the Monbijou children’s pool and the green Monbijou Park. The hotel is not far from Alexanderplatz, the Berlin Cathedral and the Red City Hall. It is about 15 minutes on foot to Torstrasse, where there is always a lot of life to be found. With the train S 1 or S 2 it is only one stop from the Oranienburger Strasse stop to Friedrichstrasse, two stops to the Brandenburg Gate and three stops to Potsdamer Platz.
The Scandinavian Scandic Hotels are particularly interesting for families. You can experience that at Scandic Berlin at Potsdamer Platz. In the morning you can enjoy the delicious organic breakfast with regional dishes, while the children get the children’s breakfast at Hausigel Sigge and then let off steam in the play corner. After a busy day in the city, you can relax in bright family rooms decorated in a Scandinavian style. The hotel has two separate types of family rooms. In the Standard Family Three there is a lot of space for three of 26 square meters, some of the rooms have a connecting door. The Standard Family Four is also 26 square meters in size and is also ideal for a family of four. The parents stay here in a king or queen-size bed, while the kids can use the fold-out wallbeds. Children up to 13 years stay free of charge at Scandic Berlin.
You can’t live more central than in this hotel on Potsdamer Platz in Berlin. Just a short walk and you are right at the Berlin Wall, the Brandenburg Gate and the Reichstag. The Film Museum and the Sony Center are also just around the corner. There are also numerous options for shopping very close to the hotel. With the Potsdamer Platz S-Bahn station and the Mendelssohn-Bartoldy-Park U-Bahn station, there are two major transport routes close to the hotel that you can use to discover the capital, Berlin. You can take the subway to Alexanderplatz without changing trains.